The tobacco factory, situated in Fiocche of Eboli, was the site of fierce fighting between American and German troops. The Germans, barricaded in the factory buildings, inflicted serious losses to the United States 157th Infantry Regiment and the 191st Armored Battalion. 75% of Eboli was destroyed by bombing; August 4 remains a symbolic date in the collective imagination of the people of Eboli. 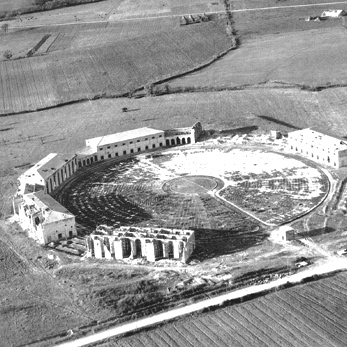 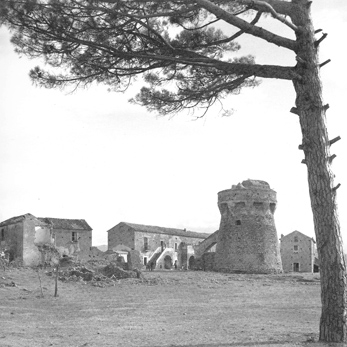 Capaccio- Paestum: the landing location of the American 36th Texas Division. A field hospital was set up near the Basilica and a small airport was utilized in Fornilli. Operations Command was situated in the archaeolical zone, the site of the ancient Greek ruins and remained there until the first of October 1943. The German troops stationed on Mount Soprano attacked the 36th Division from the left bank of the Sele River. The Americans suffered harsh losses.

Battipaglia: The landing place of England’s 8th and 9th Battalion of Royal Fusiliers, who belonged to the 167th Brigade. Battipaglia was the most bombed town in the province of Salerno because of the presence of its important railway intersection. Alongside the Fosso Canal southwest of the city, the Germans attacked the line of English troops. The canning factory of Fratelli Baratta became a German stronghold and was repeatedly bombed by the Allies using Mustang fighter planes. 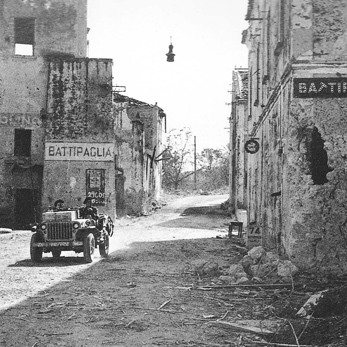 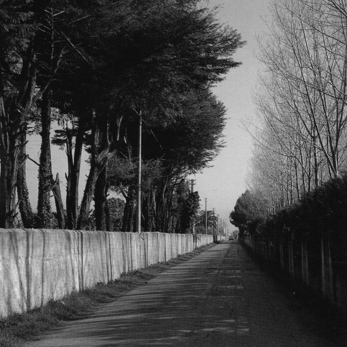 Pontecagnano:
Place of landing of England’s 2nd Battalion Hampshire Regiment of the 128th Brigade. It was a place of fierce fighting against the Germans.

The local airport, after being the basis for the German air force, was occupied on the 11th of September 1943 by the 324 Wing of Royal Air Force (RAF). The Salerno War Cemetery is located here. The cemetery contains many burials resulting from the landings and the fighting that followed, but graves were also brought in from a wider area of south-west Italy. 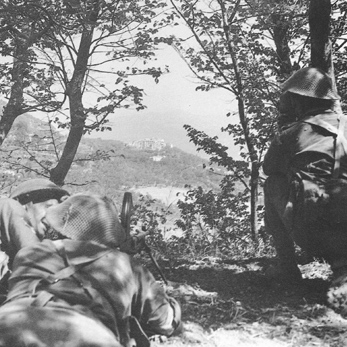 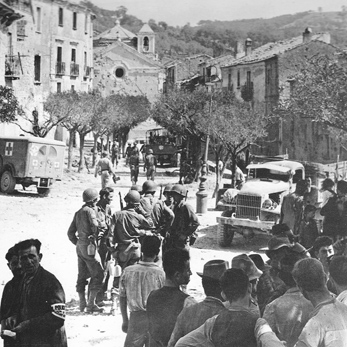 The 1st Battalion of the 504th Parachute Infantry Regiment of the United States suffered heavy losses from the German Panzer Division who held positions on the hill. A fierce and bloody battle ensued on Hill 424, also known as “Quota 424”. In Barricelle, the Americans installed a field hospital to treat the wounded.

Some Departments of US military land in the port area. The bombings, preceding the operation destroyed around half of the town. Subsequently, by moving the front to the north, the town becomes a favorite place of the Allied occupation army to spend free time. 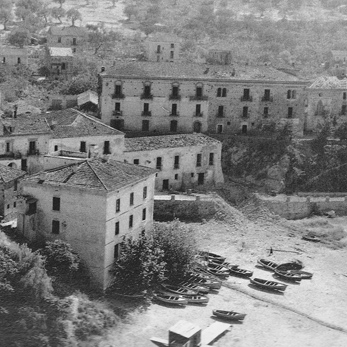 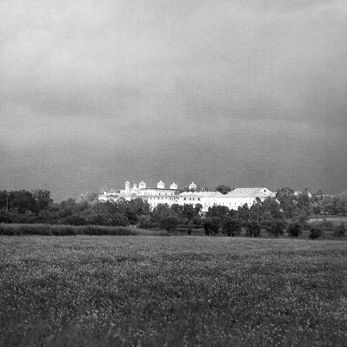 Serre is the country with the most victims, the highest percentage of the population killed. In the area between the confluence of the Sele with the Calore River, the Sele River is the site of the bloodiest battle between German and Allied troops. Here, even today, are war relics of various kinds can be found.

Campagna is the location of the largest concentration camp of Jews in Italy. The town suffered heavy bombing, the most tragic, which caused over 200 deaths, took place on September 17 in the market square. 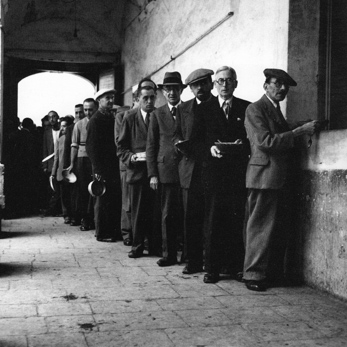 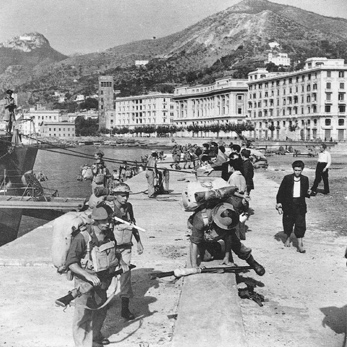 Salerno is the city where the Allied troops stopped and stocked on food and necessities. Salerno was the seat of the Italian government from November 1943 to October 1944.

On the morning of the landing, Vietri was the scene of an important action of the British Commandos. 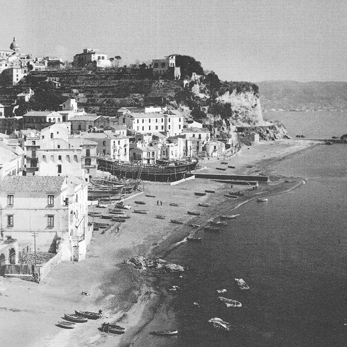 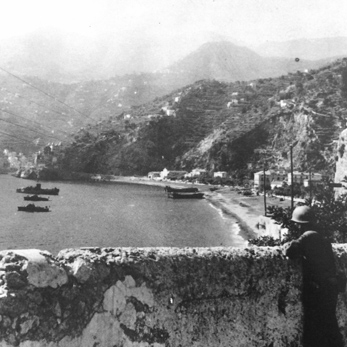 Maiori is the northern most place of landing for the American Rangers.

Tramonti:
Place of fighting between the Goering division German and the Rangers division American. 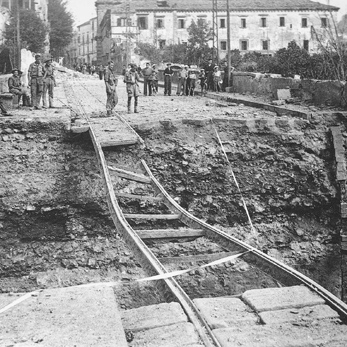 The German Army’s strategic position of the right bank of the Sarno River could have been a disaster for the city and the Allies. English Colonel Forrester was able to claim victory because he trusted the local partisan movement, one of the first in Italy. The Italian people and the British contingent were able to surprise the Gemans and capture the bridge. 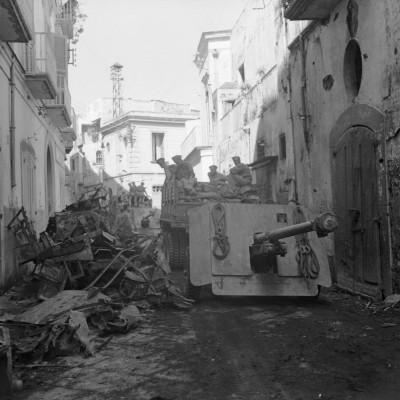 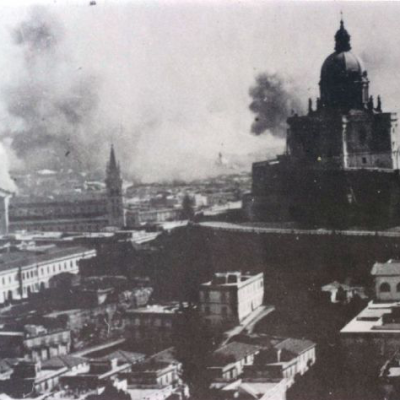 The bulwark of German defense which delay any further the advance of the Allied troops.

The most bombed cities of Italy (more than 100 bombings between 1940 and 1943). Protagonist of the desperate and courageous resistance to the Germans (first among the major European cities) with the famous “Four Days of Naples”, which saw at least 600 deaths among the civilian population. 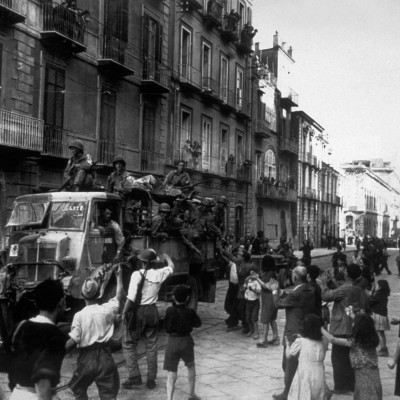 City of Molise situated on Winterline line connected to the main line Gustav, battle site between October 1943 and May 1944. For some years was born a museum dedicated to those events.

The Anzio landing (code name Shingle) took place on January 22, 1944. It was a critical military operation for the conquest of Italy by the Allies. Winston Churchill and Franklin Delano Roosevelt decided this operation on December 25, 1943 in a meeting held in the city of Carthage. The attack was commanded by General John P. Lucas. The purpose was to circumvent the Axis troops that were deployed on the Gustav Line and then, conquer Rome.
In addition, the mission was intended to ease the pressured Allied Army against the Germans in the battle to liberate Italy. The Allied commanders’ idea was to cut the supply lines of the Germans which was used to supply their troops on the Gustav line. This would take a large deployment of personnel and equipment. Participating in the operation, which began on January 22 at 2:00 am, was the sixth army commanded by General Lucas, which was formed from the 45th Infantry Division commanded by General W. Eagles, the 1st Armored Division, the 3rd Infantry Division and some English departments, including the 1st division commanded by General Penney. The means used: six transport ships, four cruisers and twenty-four destroyers, as well as amphibious vehicles of various sizes. The contingent disembarked from Tor San Lorenzo to the municipality of Nettuno. The landing anniversaries, in fact, are celebrated both at Anzio and at Nettuno. 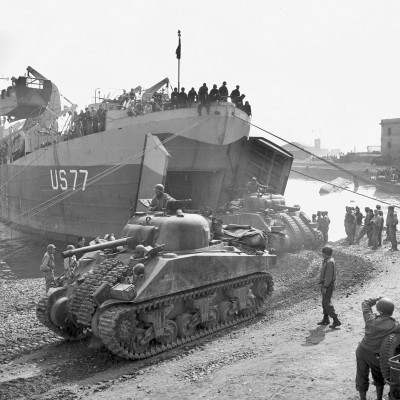 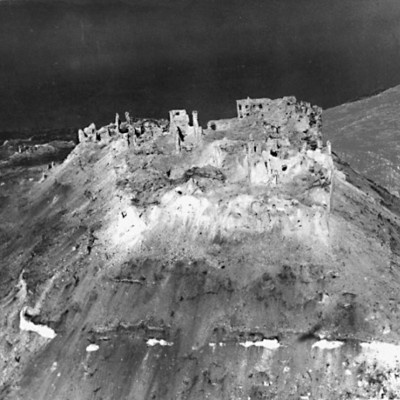 The slopes of Monte Cassino were one of the main pivots of the Gustav line. allocated all the The German were positioned towards the Tyrrhenian Sea and the center of the Apennines.

The Germans arrived in Cassino on October 14, 1943. With the arrival of the Germans, most of the treasures of the Abbey (delivered on ‘Dec. 8 to the Vatican) were made safe and the people were evacuated to safety from the place and the surrounding area.

The town of Cassino and the surrounding places became a real German blockhouse with trenches, bunkers, guns, tanks, minefields. The German sappers were strengthening the mountain terrain in the hills, and in the plains. The fortifications do not concern the Abbey that was bombed and destroyed by Allied troops on February 15.

The first two battles were a result of errors and uncertainties that led to failures and disappointments. At the end of the second phase of the battle (25 March) the town of Cassino was reduced to a heap of rubble: there was nothing left of its old appearance.

After suffering numerous losses from the first two battles, the Allies succeeded and took possession of the area, marking the end of a nightmare. On May 25th the troops from Cassino met at Littoria with the troops from Anzio and entered Rome on June 4th.